The year’s final two performance roles were both ones I’d previously taken on, but made bigger in different ways.  TITCO’s production of Jeff Wayne’s War of the Worlds reprised the role of the Journalist but in this time in the impressive Wyvern Theatre in Swindon.  This venue has approximately 650 seats,, each providing an excellent view of the stage.  Adopting the show for a larger scale tested our nerves, increased our travel time and gave us new challenges, such as getting past stage door locks and having an orchestra in the centre of the stage.  But it was a great success and energised the group for each performance.

White Horse Opera’s production of Bizet’s Carmen was bigger from a character sense.   It also brought about increased ticket sales for the company; no opera brings people in quite like this gory and passionate story that is packed-full of memorable songs.  To reprise Escamillo the Toreador was a little daunting; until I thought about it and let go.  The difference between my previous version with Bristol Opera and this time around was that I didn’t feel I had to be anyone else’s Toreador, just my own.  I no longer felt I needed to walk, act and sing a certain way.  I still took the excellent advice from my fellow performers on board as well as the lessons I gathered from performing the role previously, but the pressure was off.  I played him big, bold and arrogant and thoroughly enjoyed it!

The year finished with five Christmas-themed concerts.  These were mostly for charity or to raise funds for the choir, but a group of us did contribute to a beautiful wedding in Somerset – we stood outside the private chapel belonging to a large house and sang carols to the congregation as they emerged from the ceremony.  The final gig of the year was as part of a quartet singing carols on the stairs of the Royal Crescent Hotel.  Although we were background for the guests as they mingled with each other and prepared for their evening meal, it was gratifying to sing in such an intimate way, and we did occasionally get a smile or a mobile phone pointed in our direction.  The hotel’s hot chocolate is also excellent!

This year’s first major performance project is the Bradfordian’s production of Webber and Rice’s Joseph and His Amazing Technicolor Dreamcoat!  More on this in another blog entry, soon. 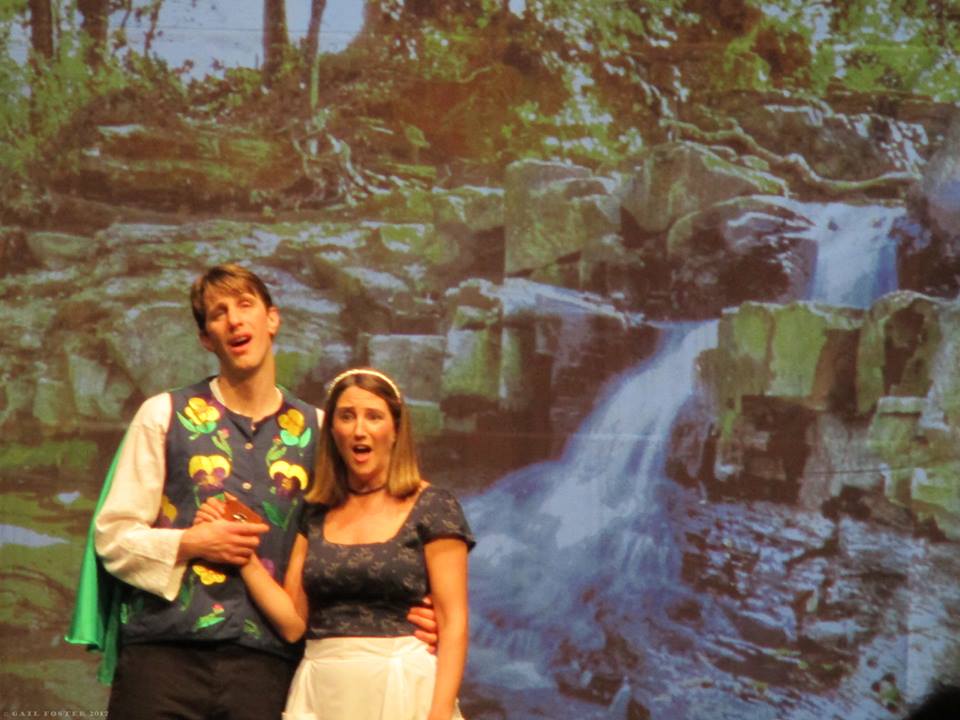 Playing the part of Strephon next to the excellent Lisa House as Phyllis.  Photo courtesy of Gale Foster.

I can’t help but think that White Horse Opera should do more comedies.  It brings out the best in both the performers and the audience.  My three favourite main opera productions with the company (not counting touring productions) have to be La Sonnambula (The Sleepwalker), Orpheus in the Underworld and this production of Iolanthe. In each production the chorus was a key component and heavily involved.  Not only that, but thanks to the vision and management of Graham Billing and Chrissie Higgs each member of the chorus was an individual character.  For example in La Sonnambula each performer was encouraged to create their own character quirks and decide what their role was in the town.  In Orpheus each chorus member was a particular god and then a party-goer in the underworld.  Finally in Iolanthe, both male and female choruses were customised.  For the female fey, their magic wands were all different as were their outfits.  The male lords had very different costumes to each other and some brandished wine glasses, trumpets and even a hunting rifle!

I believe this gave each performer more buy-in to their parts which in turn provided more energy on stage.  Being able to feed off this energy and react to it gave both the principles and the audience is why the show was a success and received so much positive feedback.  The other reason for its success was Roland Melia’s orchestra.  The Musical Director stripped the original orchestra by half to just include a flute, violin, keyboard, cello, clarinet, percussion, oboe and trumpet.  Any parts not being played by the other parts, the very talented Tony James was asked to fill in on the keyboards.  This had the advantage of not only sounding great, but it meant that the singers on stage could be clearly heard.  This of couse wouldn’t work if the musicians weren’t of a very high standard.  Fortunately, Roland managed to find very talented musicians for these parts.

For Strephon, playing the role straight and with conviction is what worked for me.  Thanks to the reactions and energy of the ensemble it was a treat of a role to play!

The cast of Iolanthe with Matt Dauncey as Lord Mountararat. 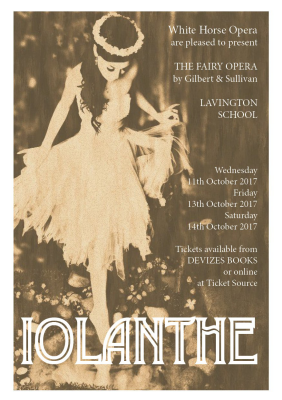 This week, I have the pleasure of performing with White Horse Opera in Market Lavington School, outside of Devizes in Wiltshire.  The group are performing Gilbert and Sullivan’s Iolanthe, or The Peer and the Peri. First performed in 1882, the story is of a fairy who married a mortal and what then happens when fairy law and the law of Victorian Britain clash.  It is all good fun and happily lampoons the House of Lords.

Into this arena comes Strephon, who is the offspring of the aforementioned peer and peri marriage. Because of this he is both half a fairy and half a mortal, which produces its own unique blend of difficulties.

So what is needed in preparing for the role of Strephon?

The quick answer here is a sense of humour, a lyrical baritone voice and a good costume.  He is an Arcadian shepherd (essentially he is from an idyllic pastoral setting) who is in love with the Lord Chancellor’s ward, Phyllis. Character-wise he is the romantic male lead as part of the ‘how will they get together?’ section of the plot.

The not-so-secret trick of playing Strephon seems to be to play him straight.  He is an instrument of comedy in the show.  His strange predicament of being half a fairy is an ongoing joke and he doesn’t seem to realise how shallow he and Phyllis appear. This culminates in the song ‘If we’re weak enough to tarry’ where the couple decide that they should marry as soon as possible in case they should change their minds afterwards.

It’s very silly and the music is very beautifully composed with some poignant moments as well as plenty of laughs.  If you are in the area, it should be a brilliant evening’s entertainment.  For more information visit:  http://www.whitehorseopera.co.uk/.