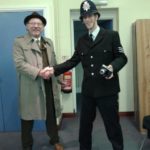 Performing the part of Sergeant Standish of the Avon and Somerset Constabulary (Police) in Shaffer’s play, Whodunnit? as part of Holt Dramatic Society’s production in 2015.

There is much humour in this classic country manor murder mystery, and not everything is as it seems regarding the eccentric guests. The Sgt I play, only appears in the second half called in with the Inspector (played in the Holt production by Francis Holmes) to investigate the murder. He is a simple but keen student of the law who only comes into his own when the Inspector dithers. This is very much a parody of an Agatha Christie murder mystery.