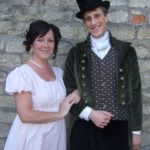 Performing the part of Mr Bingley in Austen’s Pride and Prejudice, adapted by Cally Smart as part of Holt Dramatic Society’s 2010 production. Photo by Amy Propert.

The dialogue combined with the costumes and regency dancing made for a terrific spectacle. Charles Bingley is a lovely man who means to do good and be polite to everybody. The production was held in the Courts gardens outside of a manor house, which was idyllic. Being an outdoor event the funniest moment was when I had to deliver the line “It is too nice a day to stay indoors” at a time when both audience and cast were soaked from rain.