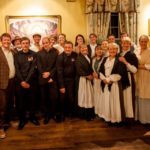 Performing the part of John in Goodall’s Hired Man as part of The Invitation Theatre Company’s 2014-15 production. Photo by Chris Watkins.

I played the lead for the first half, when he is a young married man and has moved to a new area to work. It is a personal story set in the early 20th century. In the second half I was in the chorus and became a soldier enduring the first world war. It was a moving show to be involved in at the centenary of the war.

I put on a cumbrian/geordie accent for this. John as a character gets involved in his work but expresses his thoughts to the audience. The trio If I Could at the end of Act I is very powerful and emotional. John’s solo What a Fool I’ve Been is also quite challenging and emotionally charged.