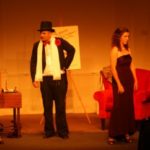 Performing the part of Buff in Mozart’s Der Schauspieldirektor (Impressario) as part of Stentorphon Opera’s production in 2009-10. Photo by Michael Smith.

This is a one act opera in which two Soprano’s battle it out for the main role in a new opera. Buff is the comical assistant to the director. This is a light role in both music and acting style. It was also when I first tried a yorkshire accent in a performance. A little to broad and mixed an effort, so I dropped it for the remainder of the performances.

For those who don’t know it, I recommend listening to the trio, “Ich bin die erste Sangerin” – wonderful overlapping harmonies.