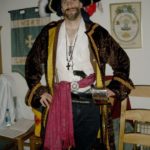 Performing as the part of the Pirate King in Gilbert and Sullivan’s Pirates of Penzance, as part of White Horse Opera’s touring 2010-11 production. Photo by Toni Webster Johnstone.

I had first performed in this operetta in University but I was delighted to take on the rogue-ish Pirate King. He is lots of fun and not at all fierce behind his swashbuckling exterior. His music and dialogue is sung with pomp and ceremony. After all, these pirates are all noblemen who have gone wrong.