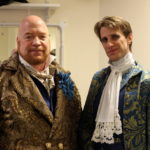 In complete contrast to the passionate and tragic Cavalleria, Campanello di Notte is a complete farce. This part was a lot of fun to play as my character, Enrico, is a hyper-active rogue in the same mould as Bugs Bunny or Jim Carey’s Mask. The interaction between Enrico and the characters Don Annibale Pistacchio (played by John DesLauriers, above) and his cousin Serafina are terrific and very action-packed. Enrico has four costume changes during the show, which is a record for me!