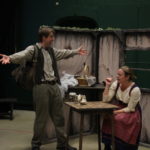 Here I am performing the part of Father in the dress rehearsal for Tessitoura’s production of Hansel and Gretel in June, 2014. Photo by Dajana Kovac.

This was a fun role but surprisingly nerve-wracking as it involved waiting around for his one big scene with Mother. The character’s main role is really to provide exposition as to what the children can expect to find in the woods, but he comes home drunk and can be played with a degree of anger and menace, but also with a degree of comedy.