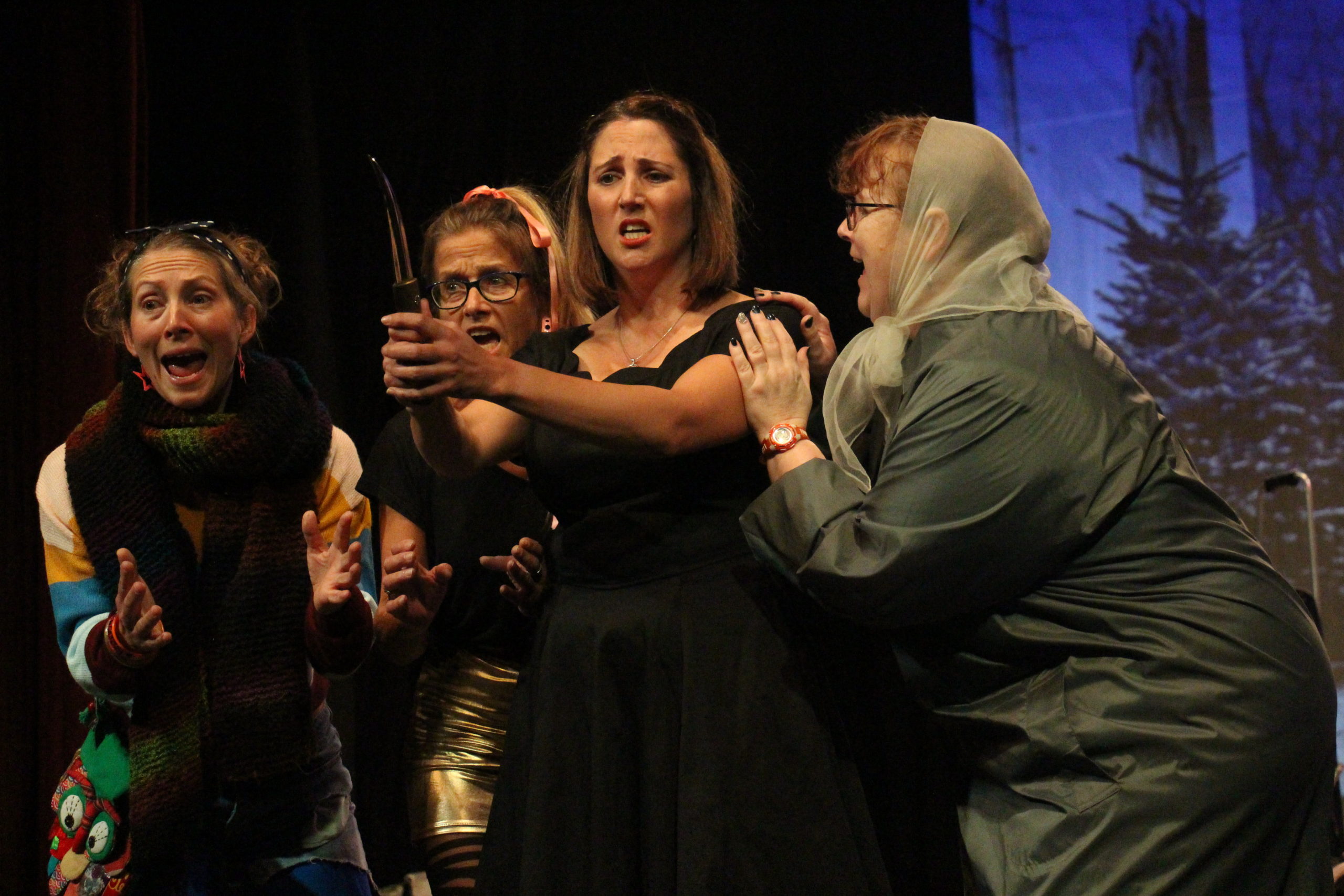 Performing Magic Flute seems to be a recipe for onstage antics and unpredictability.  The plot is all over the place and has more akin with pantomime than highbrow opera, whilst the characters range from a pious prince and bumbling birdman to the epitome of wisdom and a very vengeful queen.  Thanks to Mozart and the original acting troupe the music is sublime whilst the fantastical storyline is escapism mixed with masonic symbolism.  So within moments of each other, the audience can expect to witness the wisdom of Sarastro, the valour of Tamino and Pamina and the silliness and simplicity of Papageno and Papagena.  The ‘high note’ of the night, however, has to go to the Queen of the Night, who in the original was Mozart’s very talented sister-in-law.  In stark contrast to Sarastro’s calming words, she melodically screams her way through an argument with her daughter, Pamina.  The original acting troupe is also responsible for two characters playing instruments on stage; Tamino has the famed magic flute and Papageno has his magic bells.  These are often mimed in performances and are actually played by the orchestra.

The lead up to performance week went very well, except for one very important factor.  The part of Tamino appeared to be cursed; Not one but two performers pulled out ahead of the October show leaving the society in a pickle with less than two weeks to go!  Fortunately the third Mr T. turned out to be a singing gem with a memory to marvel at.  After just one rehearsal Matthew Bawden was performing the part at the Tech rehearsal almost flawlessly!

So, how did it go?  Really well, actually!  The group was dedicated to the cause and having fun on and off stage.  Director Chrissie Higgs also made sure that the chorus was kept busy, which isn’t always easy in a Mozart opera.  From a centipede-like serpent to dancing slaves to councillors (both male and female), there were plenty of scenes to perform in.  Meanwhile, the principles added excellent characterisation to their parts whilst still sounding superb.  The three ladies were staunchly faithful to the Queen, but also provided silky harmonies and choreography involving umbrellas.  The three Guardians (originally three boys) gave very fun characters performances as a new age traveller, a raver and an old bag lady but still appeared as a collective that sang wonderful harmonies.

I was having a tricky week vocally as I was on the verge of a cold and my voice was much deeper than usual.  Having eaten only apples and honey all day on Tuesday, the Director provided a prop-treat.  When Tamino and Papageno are offered food during their trial, we were given marmite sandwiches.  In this production, my character is meant to be disgusted by them, but I was delighted!  The first one was finished on stage and the second on the journey home!

For me, it was a tricky start…  I lost my way during my first aria (when Papageno introduces himself, explains what he does and what he wants out of life) and ended up singing the first verse three times!  Even worse, knowing that I needed to explain Papageno’s need for a partner, I tried to improvise a third verse but gave up and went back to the first verse.  Off stage again, I could feel the sweat pouring from my head, although that was partly the heat from the lighting.  The rest of the performance was absolutely fine, but the experience shook me a little.

I reacted by reinforcing the structure of the song.  Because it has three verses that use the same tune, I imagined my actions during each verse and what Papageno was expressing each time.  After a few private runs I’d established that in the first verse I would sing about birds whilst holding the bird cage, I’d discarded it by verse two, then sing about catching women whilst holding my other prop, a net.  Finally, during verse three, I’d give the net to  Tamino whilst singing about longing to find a wife.  Thankfully it worked, and I didn’t mess the aria up a second time.

Perhaps the craziest single show I’ve ever been involved in.  It was strangely hot that night, and everyone in the hall could feel it.  The show started well, and the orchestra was on excellent form.  They’d gotten to the stage where the group were very confident with the pieces and that showed.  Suddenly, my phone prop (a modern take on the original pan pipes Papageno uses to call for Papagena) started sounding like a phone running out of batteries, getting slower and lower all the time.  Then, when the three Guardians told me to play the magic bells to bring Papagena to me, they made no sound.  I tried again and filled in the silence with “are they broken?!”.   Then I heard a call from the orchestra… “Try again!”.  The song continued and the audience laughed along.  Phew!

Things got stranger during the Papageno-Papagena duet however, when the orchestra stopped playing all together.  It turned out that a member of the audience had collapsed. The audience members nearby turned to us in the stunned silence that followed and told us to carry on.  The Musical Director, Roland Melia brought us in from the top of the number and we carried on.  Meanwhile, a doctor was in the house – none other than Soprano Suprema and our Queen of the Night, Barbara Gompels!  She attended to to the ailing gent whilst in her full queen costume.  Then, as soon as the Papageno/na duet was over, she was on stage for her next scene!

Our final night went without a hitch.  I did receive a surprise blow to the head – Chrissie had replaced my marmite sandwich with a baguette – and my magic bells attempted to make a break for freedom, but compared with Friday, this was child’s play.   The feeling afterwards was one of satisfaction.  I’ve spoken to a few co-performers since who would have been happy to continue into the following week.  I was happy to leave my many lines behind, but I’ll miss the onstage collaboration with my fellow performers in White Horse Opera and the music.  Oh, the music! 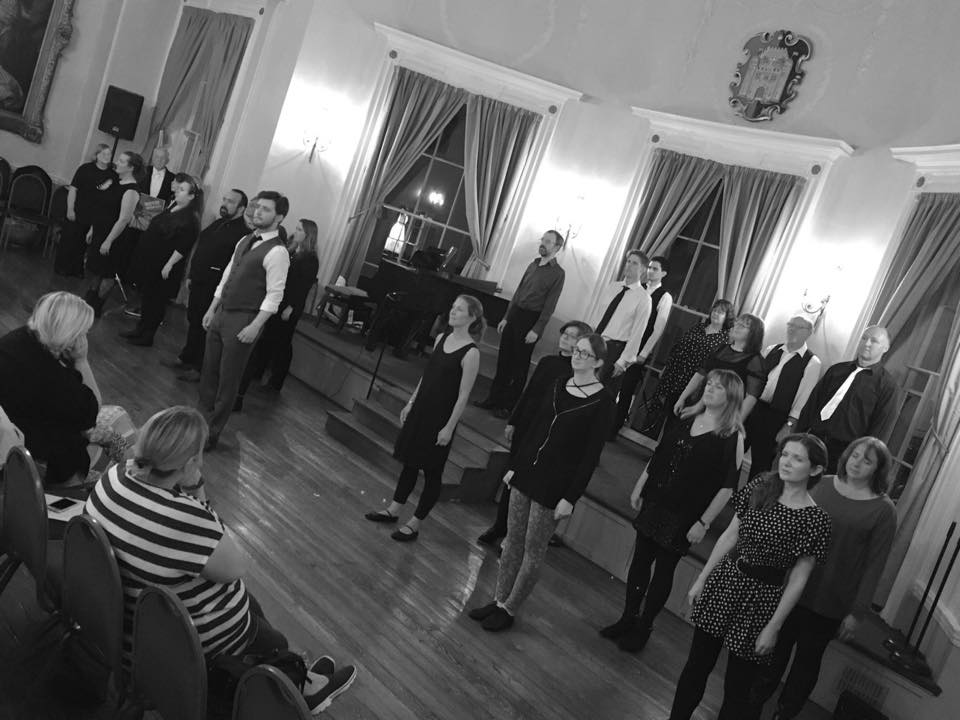 After the positive buzz created from DMT’s production of Jekyll and Hyde, it was a pleasure to return for more. The concert’s format was the brainchild of Lucy Upward, who like many others hadn’t performed solos for the group before. She created a list of musicals which started life on the big screen before some of them become popular covers or Broadway hits in their own right. Once she had collected everyone’s ideas, the plan was set into motion, literally.

The most wonderful part of the whole rehearsal process was, to my surprise, the choreography. Jacqui Davison gave many of the big chorus numbers dance moves that not only challenged us but made the songs far more dynamic. Songs from the Greatest Showman and Cabaret come alive once the performers are as energetic as the music. It was so much fun harmonizing and physically moving around at each rehearsal!

For my own solo, I gave Lucy a list of songs that I would like to sing and let her choose the final song. She choose ‘What’s This?’ from Nightmare Before Christmas. I was initially surprised and a little deflated by the result, but it proved to be the best choice. Not only did it fit into the overall programme better (most importantly), it also pushed me out of my comfort zone. It’s not often you get to portray a cartoon skeleton speaking quickly and excitedly about discovering Christmas Town!

As we neared the concert, Lucy had us run through the program a number of times so that we were well drilled in performing the songs and knew what to expect from the evening. And yet, call it adrenalin, giving an extra 10% or being on our toes, we all raised our game for the performance itself.

What the event showed was that given an opportunity, every member of the group could step up and deliver a great performance. I was so impressed by all the performers. Some were larger than life, others light-footed, in the moment, animatedly funny or sensational still.

Many congratulations to Lucy for organising us and creating such a fantastic event. It was an evening to sit back and enjoy, and that’s just as a fellow performer. I think the audience really enjoyed it too! And many congratulations to Jacqui, for physically coordinating us so that we were not only in sync but for making each rehearsal a fun challenge.