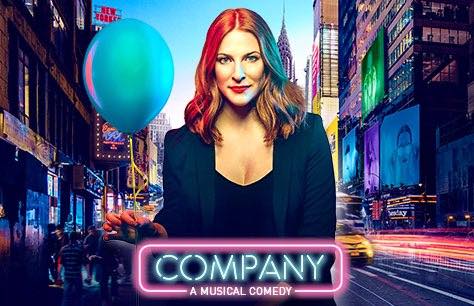 I’ll Drink to That!

We knew this was in the pipeline as it was being advertised as far back as December 2017, and my wife and I being big fans both of Stephen Sondheim’s music and of Patti Lupone’s performances, I made sure we got tickets for this.

As it turns out, our tickets were for the opening Preview Performances- the official opening is in October 2018.  This is a mixed blessing, as the performances will be at their most raw.  But this also means that the energy will be very high and anything could happen.  This proved the case on all counts.

The evening started with an enthusiastic cheer from the audience as the Director Marianne Elliott gave a quick speech, welcoming us and also warning us that there may be a few mistakes or mishaps at this stage of production.  If her appearance got a cheer, then the first number of the show got resounding thunderwave of applause.  The cast had performed the number ‘Company’ and held their end-of-number poses for as long as we applauded.

Updating the Show
The show has been updated from its 1970s roots, and with it many of the genders have been switched so that Amy is now Jamie, and most significantly, the show’s lead Bobbie is a woman.  The show feels much fresher and timeless despite the music and overall content remaining the same.

The Vision
The Director, who also directed The Curious Incident of the Dog in the Night-Time, went with a wonderfully dreamy landscape.  This isn’t just Bobby going from one episode of her life to the next.  It’s much more Alice in Wonderland meets Groundhog Day.  There are several cute details, including the number 35 appearing on doors and birthday balloons.  Is she daydreaming incidents surrounding her 35th birthday or reliving them until she has moved on with her life?

The main scenery are a series of bubbles surrounded by neon lights, as if they are speech bubbles or an individual square from a comic book.  The characters use these to go from room to room and scene to scene.  They can even be used as train carriages and flat balconies.

Incidents
Despite the Director’s warnings, there were very few slipups vocally and the prop failures made the night not only extra funny but all the more unique!  The giant balloons for her 35th birthday threatened to leave the stage, and the fridge in Jamie’s flat last its lower shelf as it flew across the stage!

Performances
The actors gave brilliant performances.  Musically all the harmonies were there and the entrances and exits flowed well.  Mel Giedroyc was very funny as Sarah, Jonathan Bailey as Jamie gave an incredibly clear and well-controlled delivery of Not Getting Married, and the Priest almost stole the entire show with her otherworldly appearances.  Patti Lupone is a Sondheim icon and didn’t disappoint, sounding as incredible as ever and commanding the stage.  Finally, it was so nice having Rosalie Craig as Bobbie.  She gave the role a new angle and plenty of energy.  Her vocal performance also delighted finishing both halves with her character’s innermost thoughts.

Verdict
I predict the show will have a great run.  It’s on until the end of December 2018, so do get tickets soon if you plan to see it.  Is it worth going?  Absolutely!  The script is very funny, the performers are superb and Sondheim delivers some of his best work here.  Go and have fun!