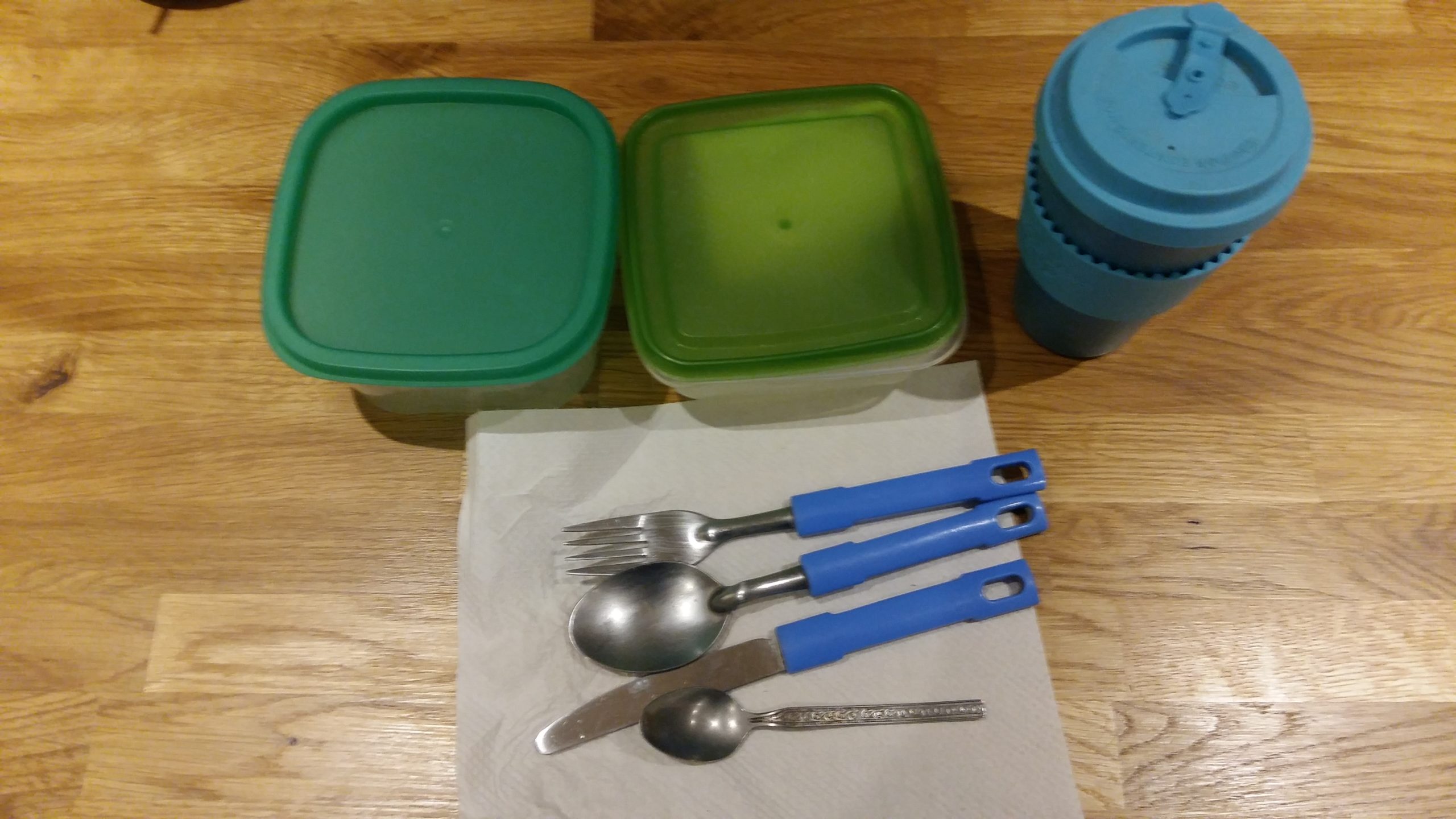 Today I was a Support Artist (a.k.a. an Extra) again.  In my attempts to reduce waste in an industry that generally places convenience first, I have been bringing my own supplies to the film set.  Armed with cutlery, re-usable coffee cup and Tupperware containers I had previously come away with a few extra plastic containers that I could re-use.  So how did I fare this time around?

Happily, I was able to improve on the previous effort.  For breakfast I filled my Tupperware container with cereal and milk and enjoyed a cup of tea from my reusable cup.  I also used the tea point to top up on liquids throughout the day.  Lunch was a problem last time as the main course is provided in a plastic container.  I decided to ask for the salad option (pulses with cheese and carrots) in my container, and the caterer obliged.  I then asked if I could have the desert from my other container and was delighted when she not only served me a good portion but complemented my efforts.

So it can be done.  I came home having used only what I brought to set.  If more SAs do this, the culture can slowly be changed to one of reduce and reuse of plastic. 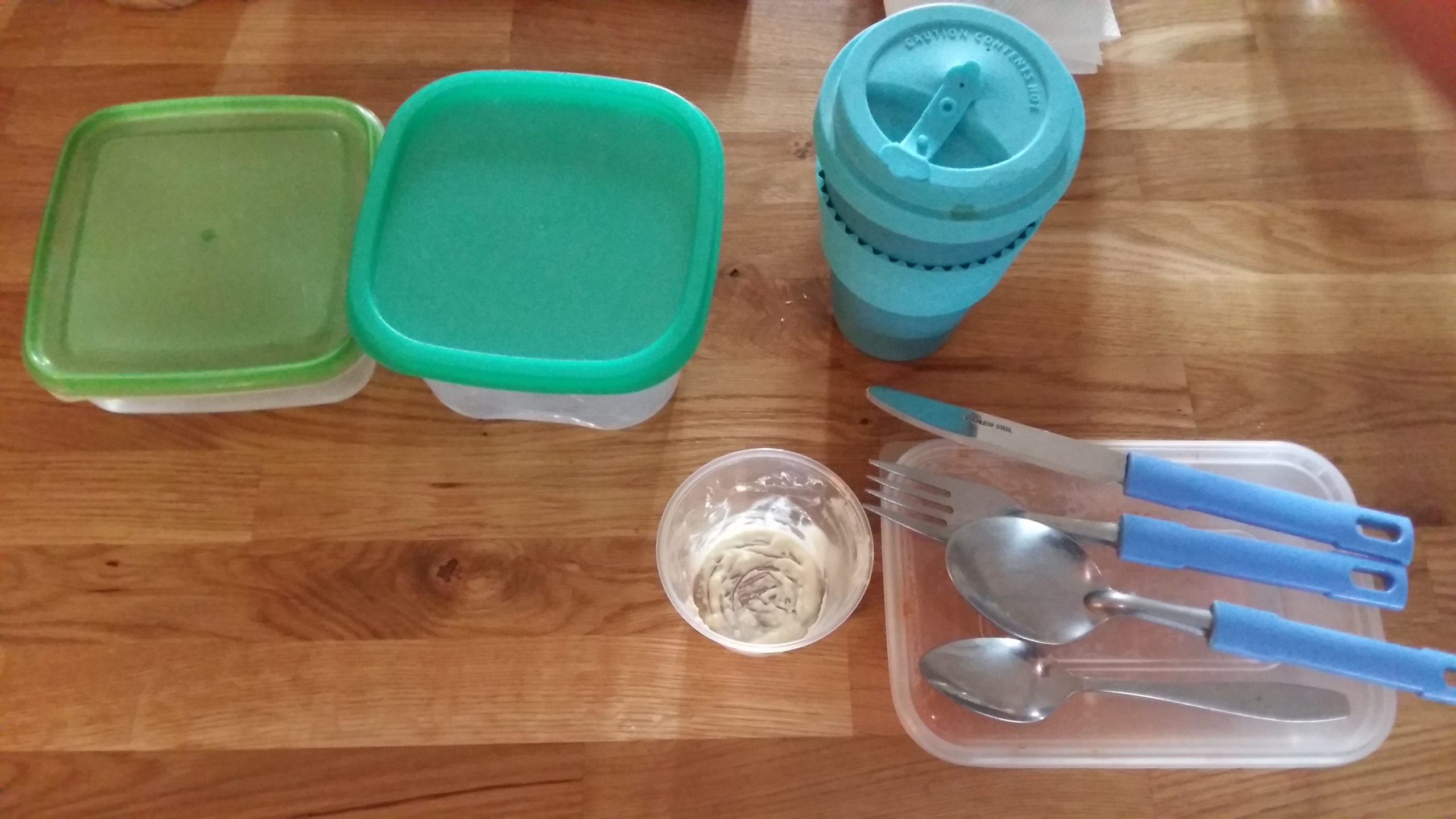 I’ve been an SA (Supporting Artist, a.k.a. an Extra) now on and off for over a year. The days are long but the experiences are always unique and generally rewarding. There are also perks for giving up your time, such as watching actors and directors hone their craft, a chance to read in the green room (area for downtime when you are not needed on set) or chat with other SAs about life in general. And of course there is the free food. Cooked breakfasts are provided, lunches often come with desserts, and there’s always tea, coffee and water available.
This last point is also the biggest problem I’ve found with film and TV sets – waste. When catering for lots of people the amount of plastic bottles of water, plastic cutlery and single-use plates is staggering. Add to that an army of extras and you’ve got tens of bagfuls of landfill every day.

Over time, I’ve been trying to change my habits and avoid the easy options when on set. I’ve been using my own coffee cup for liquids, and this year, I’ve also brought my own Tupperware containers and cutlery.
So how have I got on so far? On the two shoots I’ve attended this year, the first was well run. The main meals were provided on plates and two large bowls were provided to place cutlery and plates in so they could be washed and re-used. The desert bowls not so much, so I used my own. Drinking cups were also single-use and I saw SAs who threw theirs away when they thought they were being called and then moments later select a new single-use cup.

The second shoot was all about the plastic water bottles and non-recyclable coffee cups. They were littered around the seating areas. I avoided the cooked breakfast and filled my Tupperware container with cereal. Again, I used my own coffee cup for teas. Lunch was more tricky because it arrived at our set in plastic containers often used at takeaways. I resorted to using them as well, but have taken them home to re-use as storage for my home-made chilli.
So reducing waste on set it can be done. It will take a lot to change this throw-away culture of convenience, especially when feeding many mouths. But if productions consider the environment as much as budget and if SAs appreciate re-use as much as convenience then we can change it, one SA at a time.