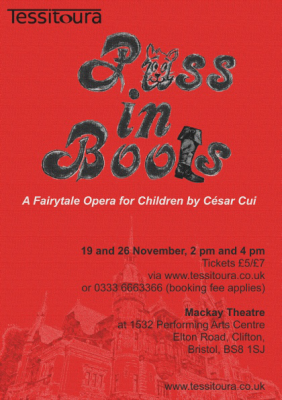 I was very pleased to be asked to review Tessitoura’s latest production. If you’re anything like me, then you will be a bit sketchy on the story of Puss in Boots and get it mixed up with other storybook cats and that version of Puss in Boots from a popular an animated movie franchise. Like Shrek, the story does involve an ogre as well as royalty but that’s where the comparisons end.

The fairy tale story itself dates back to Italy in the 16th century and was again published in France in the 17th century.  The operatic version was composed by César Cui in 1913 with libretto by Marina Stanislavovna Pol’.  It follows the plot of Perrault’s 17th century French adaptation with instrumental introduction and dances inserted. Tessitoura manages to fit this short three-act opera into a single, flowing performance.

I won’t go into the story here, but rest assured it is easy enough to follow.  The cat is played with style and great expression by the director Sophie Kirk-Harris. Aside from her excellent singing, she manages to add cat mannerisms to her performance as well as the bravado required to play such a confident feline character! The singing is of an exceptionally high standard throughout the cast and the acting is very strong, including Thomas Wood’s innocent portrayal of Jean, the poor miller’s son, Robert Marson’s enthusiastic energy and entranced looks of the King, Jennifer Walker’s majestic and moving performance as the Princess and not forgetting Harry Benfield’s lumbering and terrifying Ogre.

The children are of course, the stars of the show in their own right.  They provide a sense of
the story and give the plot meaning through their actions and reactions with the other characters. Their expressions and dancing are fantastic and the singing is very good, especially in the show’s final song.

If you get the chance to see it, please do. Go and you too will be transported into this very charming fairy tale opera.  You can catch it at the Mackay Theatre, Clifton on Sunday 19th and 26th of November when there will be performances at both 2pm and 4pm.