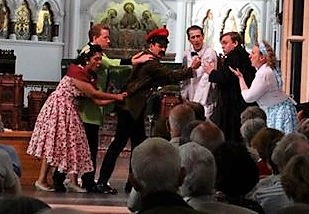 A post-production review:  Opera with a pinch of improvisation!

It is said that the best way to move on from one project is to start another and that was certainly the case after performing in TITCo’s production of Into the Woods. With Tessitoura’s production of Barber of Seville I had a month to learn the lines and music for the part of Doctor Bartolo.  The production had its difficulties; for starters there are many difficult passages to sing, which at times (especially for the Count and Rosina) was the equivalent of doing vocal gymnastics.  The dialogue lines (replacing the recitative, or sung dialogue) were also adapted and completed with about a month to go.  Finally, the director also had to pull out of the production and so Harry (playing Don Basilio) took on the role of stage director. Thanks to his general direction and character tips the scenes took shape, but the performers still had room to contribute and suggest possible moves and expressions.

These difficulties actually brought out a freedom in the performers.  The best part of being involved in this show was seeing how my fellow performers and I managed to adapt to either someone not remembering a line or trying something different.  Couple that with three very different venues (2 churches and a medieval barn) and every performance was unique.  An example of this was when Sam, who played the Count, wanted to change the joke name he gives my character.  Rather than calling Doctor Bartolo ‘Barbaro’ (Italian for Barbarian) he went with ‘Fartolo’, which makes more sense to English audiences, and got a big laugh on the night!

The final example I will give was certainly not scripted but worked because of how the cast reacted to the situation.  My character is getting a shave. Brendan, playing the barber Figaro, has shaving foam at the ready and is motioning it slowly towards me like a parent would ‘train’ food into their child’s mouth. I reacted by leaning back in my chair… my plastic, basic chair… SNAP.  I hit the floor.  There is an uproar of laughter from the audience.  I, both as a performer and character slowly get up, bewildered, helped by Brendan.  I try to stay in character, blustering, knowing that if I don’t I won’t be able to stop laughing myself.  Meanwhile Rebecca playing Rosina has swiftly replaced the chair.  Finally the Musical Director announces we will go from a certain figure in the score, and we carried on.  Blatantly a gaff had occurred but it was handled beautifully by the cast and the audience loved it.

It was a pleasure to be involved in a production with such on-the-edge energy about it, with such a talented bunch of performers!

This week, I will perform with Tessitoura, a Bristol-based opera company that performs in unique spaces with a small but very talented group of singers and musicians.  This project is Rossini’s masterpiece, The Barber of Seville (1816). It follows the fortunes of The Count Almaviva, Rosina, Doctor Bartolo, Don Basilio to name but a few.  Oh, and a certain barber called Figaro.  This very special opera was based on Pierre Beaumarchais’ French comedy Le Barbier de Seville (1775) and is the first of a trilogy, the second of which – The Marriage of Figaro – was famously adapted into an opera by Mozart (1786).

I play the main villain of the piece, or perhaps more truthfully fodder for the Count’s trickery and Figaro’s scheming.  He is a physician and Rosina’s guardian, but he has grander schemes in mind involving marriage and money. This role appears to be the exact opposite of Enrico in Donizetti’s Il Campanello di Notte (The Night Bell) in which I was a bugs bunny-esque rogue.  Now I am Elmer Fudd!

So what is needed in preparing for the role of the Doctor Bartolo?

The role certainly requires an ability to say things quickly, as with the pitter-patter song, A un dottor dell mia sorte.  Otherwise it requires a mix of comic timing and a hint of malevolence.  But mainly, it is a straight-role, being a yin to the Count’s yang.  If he is outrageous, be grounded, and when the Count is calm, then Doctor Bartolo will no doubt be pacing the stage, raging (again, think Bugs and Fudd).  He is also an older man so I need to modify my behaviour to suit that persona.  I even have a prop (a cane) and a bow tie!

It should be lots of fun. The cast is very talented and Rossini’s music, sublime!  If you are looking for something to do this weekend, then do consider coming along!  http://www.tessitoura.co.uk/  It will be performed in St Matthew’s Church in Kingsdown Bristol, St. Mary’s Church in Stoke Bishop Bristol and the medieval barn in Winterbourne.     It’s also in support of the Above and Beyond charity.