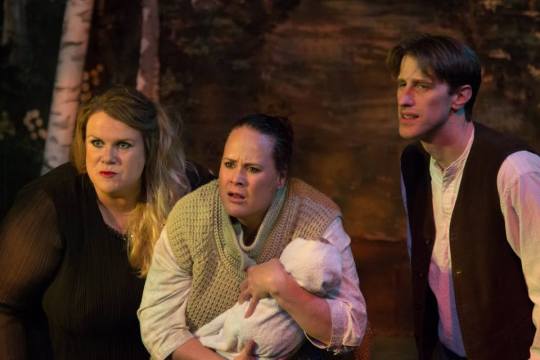 Performing the Baker with Teresa Bray as Baker’s Wife and Jemma Brown as the Witch.

The Invitation Theatre Company has completed the show run of Sondheim’s Into the Woods.  So, how did it go?

From an overall perspective I have to congratulate everyone involved on what has been a tremendous undertaking and has provided local audiences the opportunity to experience this fairy-tale extravaganza in the intimate setting of the Wharf Theatre. As it turns out, a Sondheim musical requires a lot of dedication both musically and dramatically and a lot of hard of hard work has gone into this production.  Then there’s the set, costumes, lighting and sound effects needed to make this fantasy realm come to life.

This production was a journey all of its own.  The director modified the script considerably, making cuts in order to reduce the running length of the show.  This worked but did mean that some plot or character elements were missing.  The cast was guilty of poor attendance thanks to holidays and other show commitments.  This meant there were perhaps only a handful of rehearsals when the entire cast was available before show week.  Another unexpected issue was that our young performer playing Jack could not legally perform the show for 6 nights in a row.  Luckily, a drama student who had previously performed the role was able to learn it in super-quick time.  Finally, this is a very challenging production musically.  Not only are the vocal lines repetitive but with subtle changes each time, some sections are rhythmically and melodically unpredictable.  For ensemble numbers such as the Act I Prologue and ‘Your Fault’ you really have to know everyone else’s part as well as your own.

How did the part of the Baker evolve? During the final rehearsals the director praised my energy during one scene. That stuck with me.  Playing an Everyman character doesn’t lend itself to putting on any particular character traits but it made sense to me to convey his emotions by engaging with them.  So if he is nervous, provide that nervous energy.  If he is joyful, express that joy.  So in a sense, he becomes a focussed version of me rather than a character of his own.

The Baker, like all the characters who venture into the woods, goes on a journey.  It was important, especially with script cuts, to really show changes in his mood or character during the scenes.  In short order, he starts off relatively content, but becomes nervous and cautious when he starts his journey into the woods.  When he starts retrieving items to make the witch’s potion he becomes emboldened.  This is an important change as the Baker’s Wife needs to see the changes in him by the time they sing the duet, ‘It Takes Two’.

In Act 2, the second journey into the woods turns far more serious.  Again, expressing the part with sincerity and energy are key.  The main change here is showing his dependence on his wife before then having to achieve things without her guiding hand. To quote the character:  “It was my wife who really helped.  I depended on her for everything”.  I really liked developing this relationship and made sure that during Act 1 and the first part of Act 2 he can be seen looking to her for reassurance or moral support.

It was a pleasure to perform such pieces as No-one is Alone, Your Fault and No More.  They are beautifully written songs and it was a treat working with my fellow performers to bring this to life.  Thanks to choreography we were set in our positions and could concentrate on expressing and vocalising the characters.

Verdict Into the Woods is deceptively difficult and requires a lot of hard work and focus to pull off. The Baker is no different in that sense. He requires attention throughout the show and doesn’t really have a lot of off-stage time.  For this reason I’m happy the run is over.  It has been a wonderful experience, one I’m delighted to have had, but now it’s time to leave the woods.