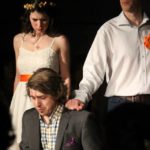 Performing the part of Masetto in Mozart’s Don Giovanni as part of Tessitoura’s touring production in 2013. Photo by Eleanor Murray.

Masetto is a young, jealous man who suspects that his fiance Zerlina will have a fling with Don Giovanni. It is a relatively small role, and all scenes are ensemble but his character is flawed, which makes him interesting to play.