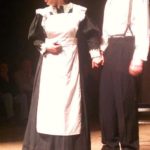 Performing the part of Figaro in Mozart’s Marriage of Figaro as part of Tessitoura’s touring production in 2012. Photo by Roxy Harris.

Figaro is the fiance of Suzanna and is appalled when he learns that the Count wishes to have his way with Suzanna. Figaro schemes but it is the plans of the Countess and Suzanna that finally put things to rights. Although his is the title role, it is the Count and Countess that take the spotlight whilst Suzanna does most of the stage work.

The music is sublime, especially the ensemble singing of the Act II and III finales. I have been lucky enough to perform this role with two different groups and have enjoyed it immensely both times. From an acting perspective, Figaro talks and acts with confidence, but is emotionally thrown by events on several occassions and shows his jealousy and feelings of betrayal.