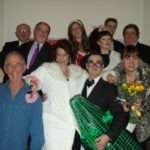 Gianni Schicchi is about village inhabitants who wish to stop the deceased Buoso’s money going to the monks, so they entrust Gianni Schicchi to resolve their problem.The music and plot is fast and chaotic to mirror the bickering relatives and yet this one act opera also contains the sumptuous soprano aria, ‘O Mio Babbino Caro’.

This was probably the hardest music I have had to learn because the music is mostly ensemble characters interjecting and arguing and the tonality is not predictable. The result was learning all the parts to get the cues and notes right.