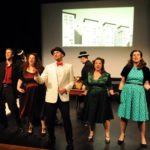 Performing as one of the members of the Angels City 4 in Coleman and Zippel’s City of Angels, as part of Trowbridge Musical Society’s 2015 production. Photo by Trevor Porter.

This was a treat of a musical to be involved in as the Film Noir plot was clever and the dialogue slick and witty. The music style is predominantly jazzy with the Angels City 4 providing backing with some fiendishly difficult four-part harmonies. It was challenging but excellent fun.