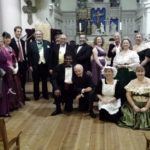 Performing as the part of the Gabriel von Eisenstein, in Strauss II’s Die Fledermaus (The Bat), as part of White Horse Opera’s 2015-16 production. Photo by Chrissie Higgs.

The music is very well known and tuneful and there is humour throughout. As with most of things I do, it was translated into English by the legendary Graham Billing (back row in yellow waistcoat). As for the character Eisenstein, he is a rich playboy whose friend, Falke, wishes to see him atone for his crimes. Chaos and fun ensue. The part itself has no actual solo, but lots of duets and trios.